(*also I know collection cards are still labeled as trading cards, what I mean is like, I'm less interested in cards like ygo! or mtg and more into cards that are have full illustrations / character art... I hope that makes sense ^^;;)

been obsessed with these korean artist cards lately! especially DOMI WORLD (middle and left card), the one on the right is Coral Tree. I'm probably going to try and put another order through for more of their cards.

I also got some Daiso card sleeves... the big one with the keychain is from a separate seller though.

got most of these cards for a few cents, I especially love the di gi charat cards. I love koge-donbo's art so I'm always happy to find illustration cards from her. I absolutely love the art style on the touhou card and might try to collect some other cards from the set.

I also got a random assortment of cards (on the left) but my fave would probably be the pop'n music card! it's another card set that I'm interested in collecting *sighs*, but from a quick search I think I'm aiming to just get the full illustration cards and not the character cards.

yes I only made this order to get the kawoshin card

my eva cards!! there are tons of evangelion card sets though I'm not crazy enough to collect them all. the kawoshin one is from the 1996 Cardass Masters Vol. 1 and the four cards on the right are the 1997-1998 Calbee cards. Iirc they were packaged together with a bag of Calbee's potato chips.

while looking for more info I found this kawoshin postcard... I'll definitely try to find more kawoshin / reisuka paper goods in the future.

(and yes I can't be bothered to look up what the bottom left shinji card is from, I only bought it because it was dirt cheap) 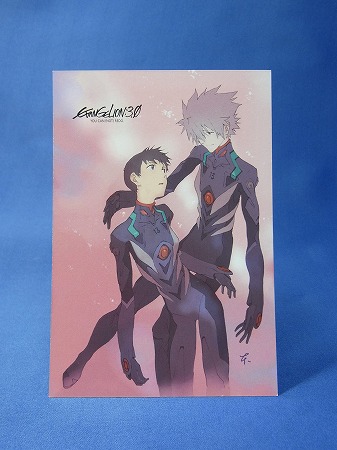 another impulse buy of mine is this Reiko Shimizu tarot card set! other than illustration cards I've also been into really pretty tarot sets... I think I've only got two or three sets right now though. I love older manga art and this just reminds me that the next time I try to do some online shopping I should be on the lookout for some furoku (tho I'm sure this tarot set isn't one, it just reminded me of it)

lastly a closeup of my favorite cards from the haul

found this cute alice in wonderland figure. I love small diorama figures (currently got a ton on my suruga-ya wishlist) so I just had to get this one.

I might buy the other figures on the list if I see them at a good price (I only now just realized I overpayed a bit for mine aaa). I think I'd definitely be interested in getting number 3 or number 2.

also, I just looked up Alice on mfc because I was interested in her 1/8 figure (also POP Wonderland) and her trading figures also come in a pink colourway... I've not seen it for sale so far so I doubt I would ever find one (and I don't absolutely love this figure so I probably wouldn't pay more than a thousand yen for her anyways) so I think I'll settle with just her regular colourway for now _(:3\

noticed volume 4 went on sale so I bought a box + a ton of packs of the other sets since I'm close to completing vol.1 and vol.2. volume 4 has so many cards (and 33 extra cards) so I might get a second box soon...

in vs out the capsule

for the first part of my haul I bought some gashapons! when I still used to go to malls I'd love playing the gashapons at the toy stores! I even had a giant bag full of empty capsules (had to get rid of them though, they were taking up so much space). I got a Super Mario 3D trading figure, Bomberman Land History gashapon, and a cute PangYa trading figure.

was concerned at first when I saw the figure didn't match the pic but there are no slots/holes in the back for that kind of hairstyle so I thought it was just an alt. version... which it is! turned out to be the secret version of the figure. there are a bunch of cute PangYa figures / character designs so I'm extremely tempted to buy maybe one or two more.

(also did a quick look on mercari and these trading figures seem to go for so much in sets even though you could buy them all individually for much cheaper ? ah..)

next up is a Tatiana Wisla bust, a Metropolis blindbox, and a Furuta Choco Egg figure from a fairytale/wizard of oz series. not familiar with last exile but I like a lot of Range Murata's character designs and plan to collect more of them.

ngl I honestly had no idea what I was looking at when I first saw the seller's pics of the furuta choco egg toy. I decided to buy it because it was cheap and I love fairy / fairytale related items. not a biig fan of the wizard of oz (it's just alright to me), but I thought the set was cute.

and the last of my figures, a metropolis blind box! it's so old and a bit difficult to open without wrecking the box too much so I decided to just leave it sealed. Metropolis figures don't go for very much so I'll try my hand at buying Kenichi, Tima, and Rock second hand (also maybe Fifi?).

last bit is a bunch of keychains / gashapon! I swear the nurse one is a super familiar character (which is why I bought it) but I can't seem to figure out where she's from...

here's the main reason for my order! I'm surprised the listing for it was up for so long but it wasn't marked at all, in the seller's photo it was covered in so much plastic, and the lighting was really bad so it was a bit difficult to make out what it is if you aren't already familiar with the characters. I actually thought it would only be two keychains so I was very (pleasantly) surprise it was the entire set.

Ordered a bunch of cute tamagotchi merch... I've been really into tamagotchi lately so I ordered some cute items I saw.

Ordered a Kuchipatchi lanyard + card case (kuchi is also my favorite tama!), an Angelgotchi plush, the tama astrological cards, and a win-95 CD ROM. Angelgotchi's halo is a bit damaged so hopefully I can find a way to cover up the paint that patched away..

closeups of the merch